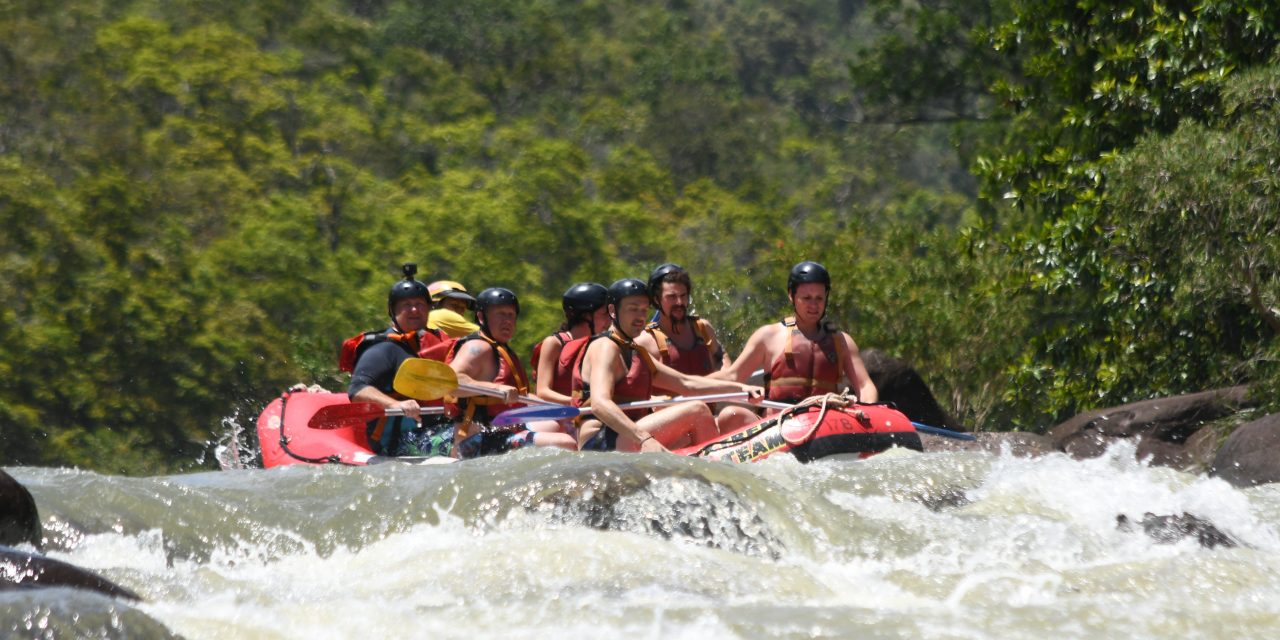 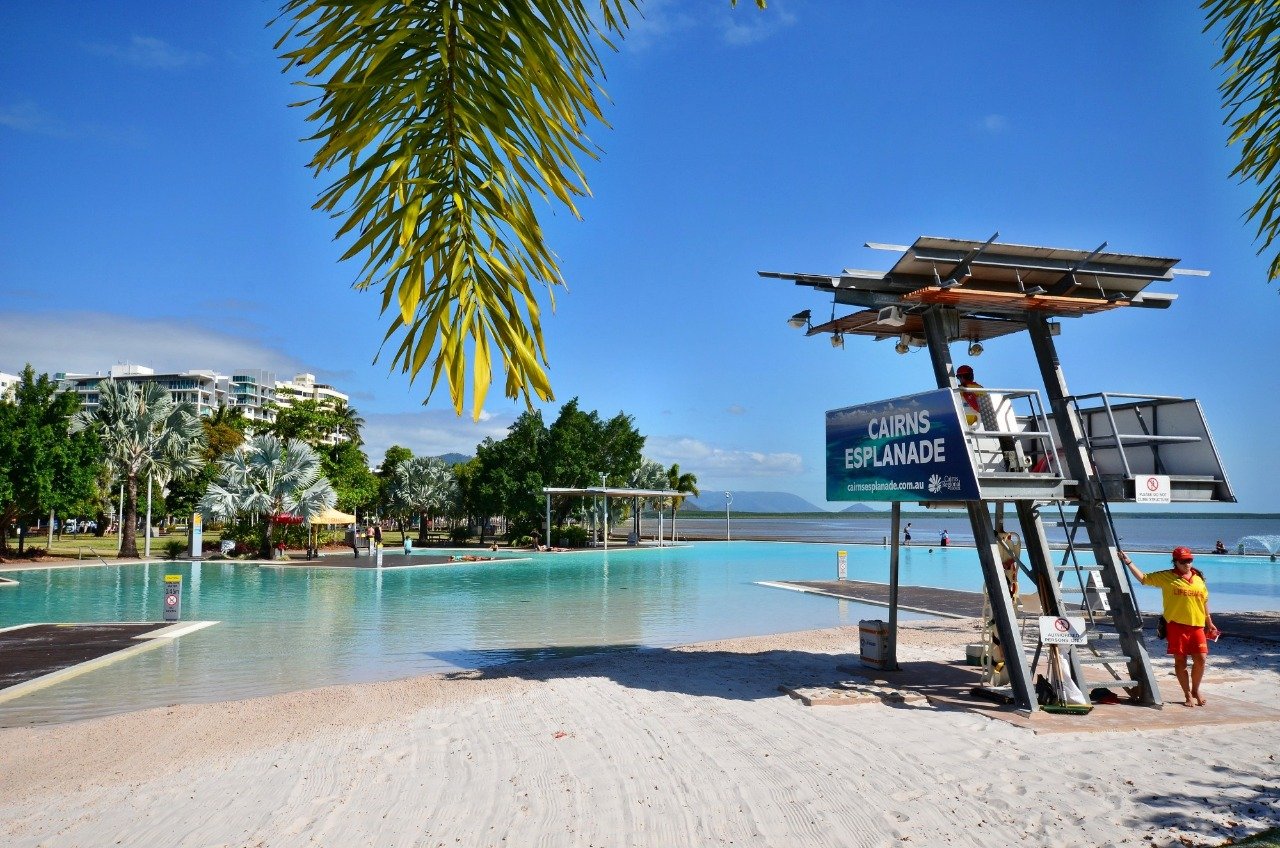 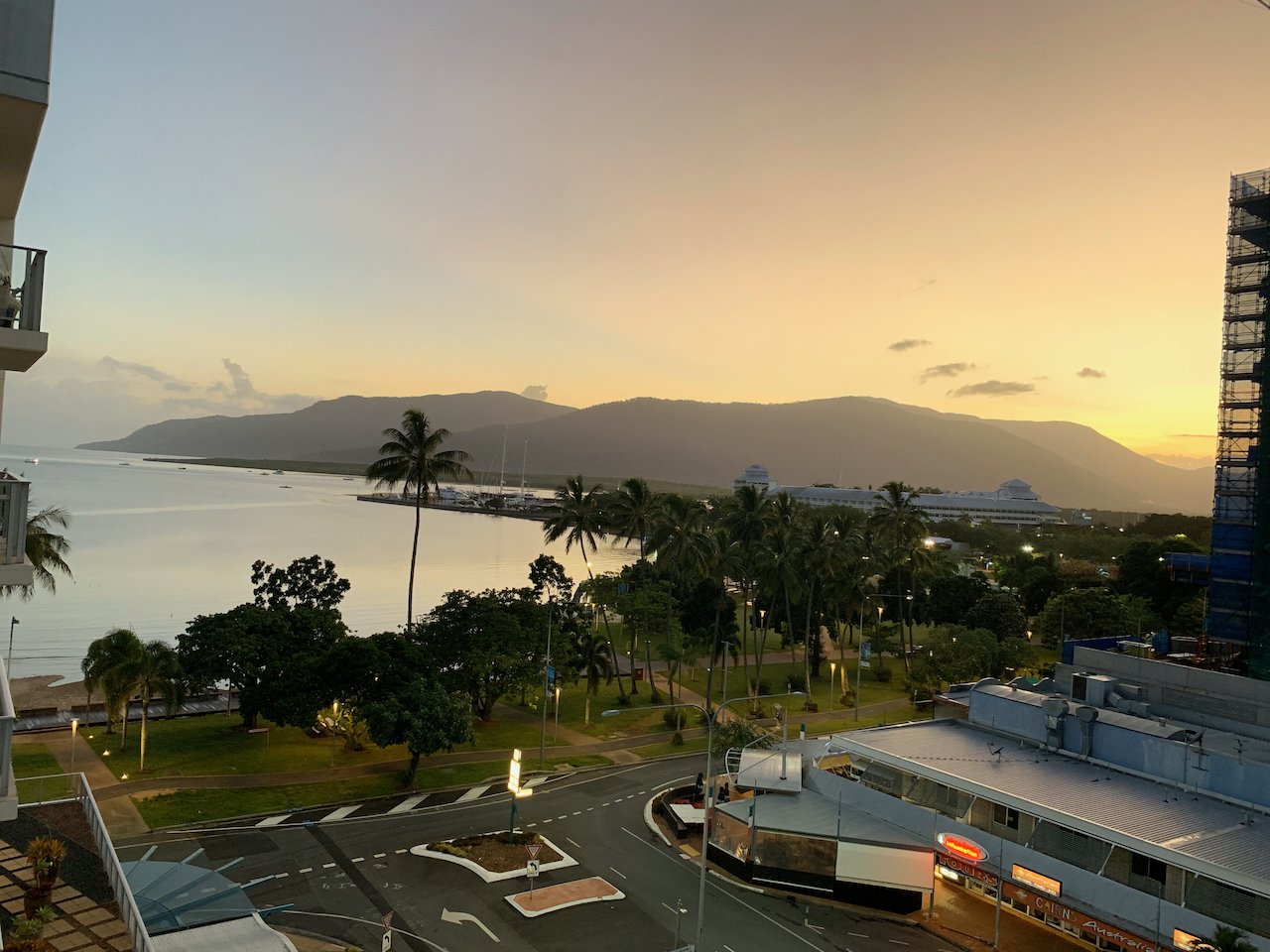 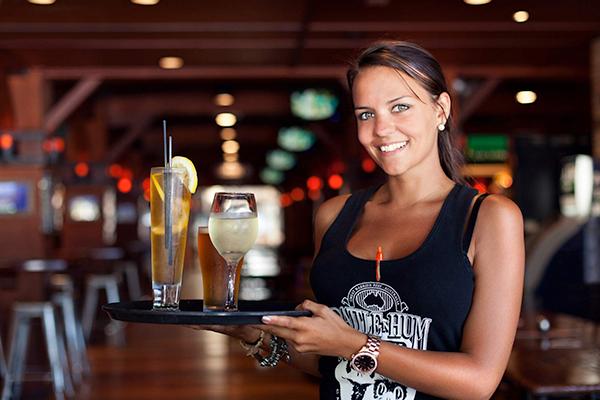 Recently I had the opportunity to host fellow blogger and long-time friend Chris, (From the Distant Meridians Channel) during his first trip to Australia.

As part of the Australian itinerary we developed together, we agreed that a 5-night stay in Cairns would be essential for him to experience Far North Queensland.

Although 5 nights initially seemed to be plenty of time to spend in one area of Australia, it was challenging to put together a detailed itinerary.

This is especially true, when you have so many great adventure options available in Cairns and a number of world renown natural destinations within the region including The Great Barrier Reef, the Daintree Rainforest and Cape Tribulation.

The following Cairns four day adventure guide is a step by step plan of what we expereinced and what we recommend to fellow travellers.

We arrived in Cairns mid-afternoon on a Sunday, took an Uber to our Airbnb apartment in the Cairns CBD and then enjoyed a few beers on the balcony, as we took in the spectacular view over the Cairns Esplanade, marina and the ocean.

That evening, we found a great pizza restaurant / bar along the bustling Cairns Esplanade called Rattle N Hum that served up great pizzas and a decent wine list and it was a fantastic way to close down our first evening in Cairns, before setting off on our adventures the following morning.

One of the things that both Chris and I wanted to do during our visit to Cairns, was to challenge ourselves by taking on one of the extreme adventure challenges offered in Far North Queensland.

So at 7:00am the following morning, we boarded our coach and commenced our 140km journey to the township of Tully to be participants in that days Xtreme Tully White Water rafting tour, offered by Raging Thunder Adventures.

Although, Xtreme Rafting is not for the faint hearted, due to its challenging rapids, rock jumps, rapid swimming and raft surfing, we were expertly guided through all of the day’s activities by very experienced river guides.

I must say that there is really is nothing like the thrill of plunging through fast flowing rapids while surrounded by some of the world’s most stunning rainforest.

The day-long adventure also included a barbecue lunch on the banks of the river and a well-earned drinks stop at a historic Queensland pub, on the way back to our accommodation in Cairns. 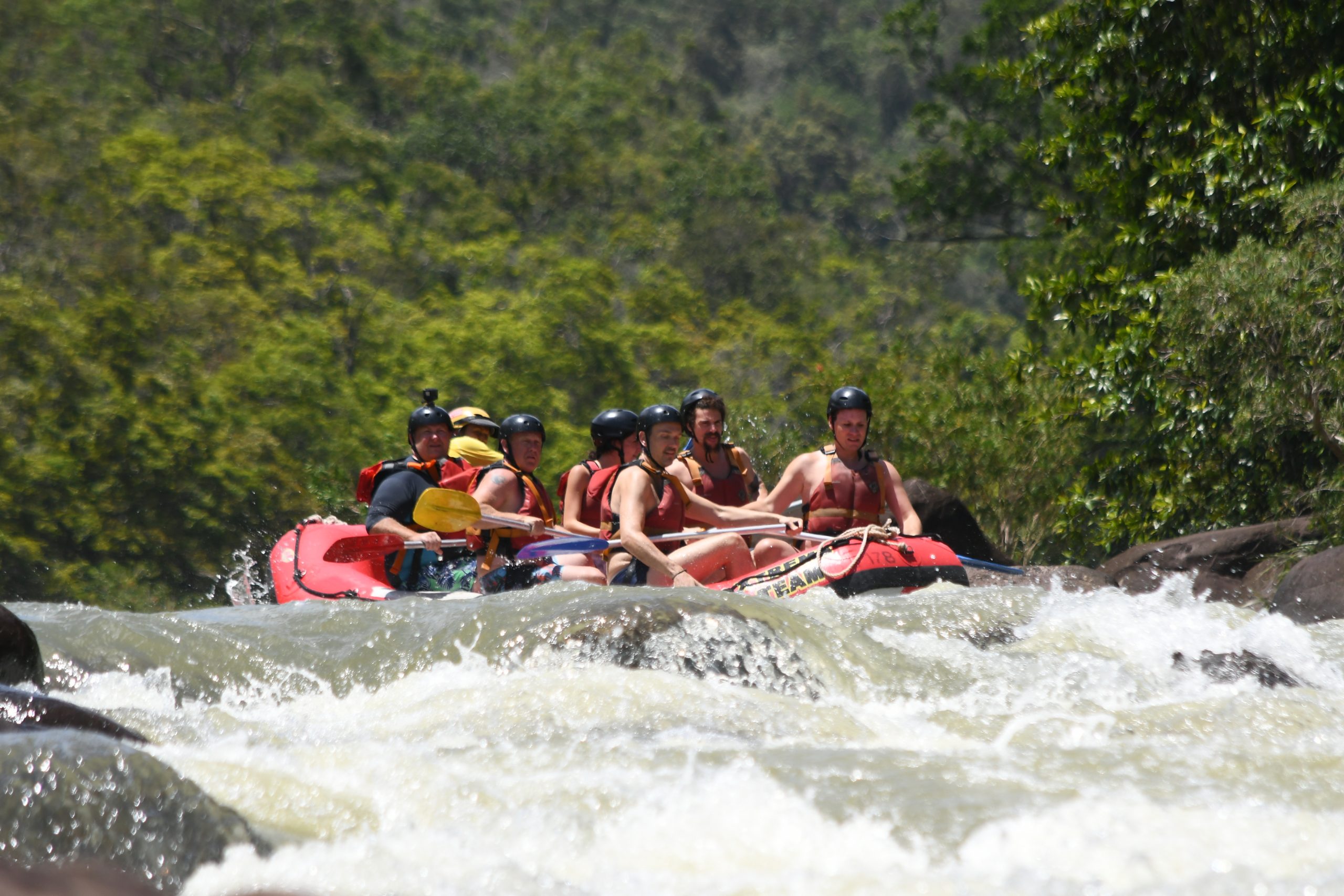 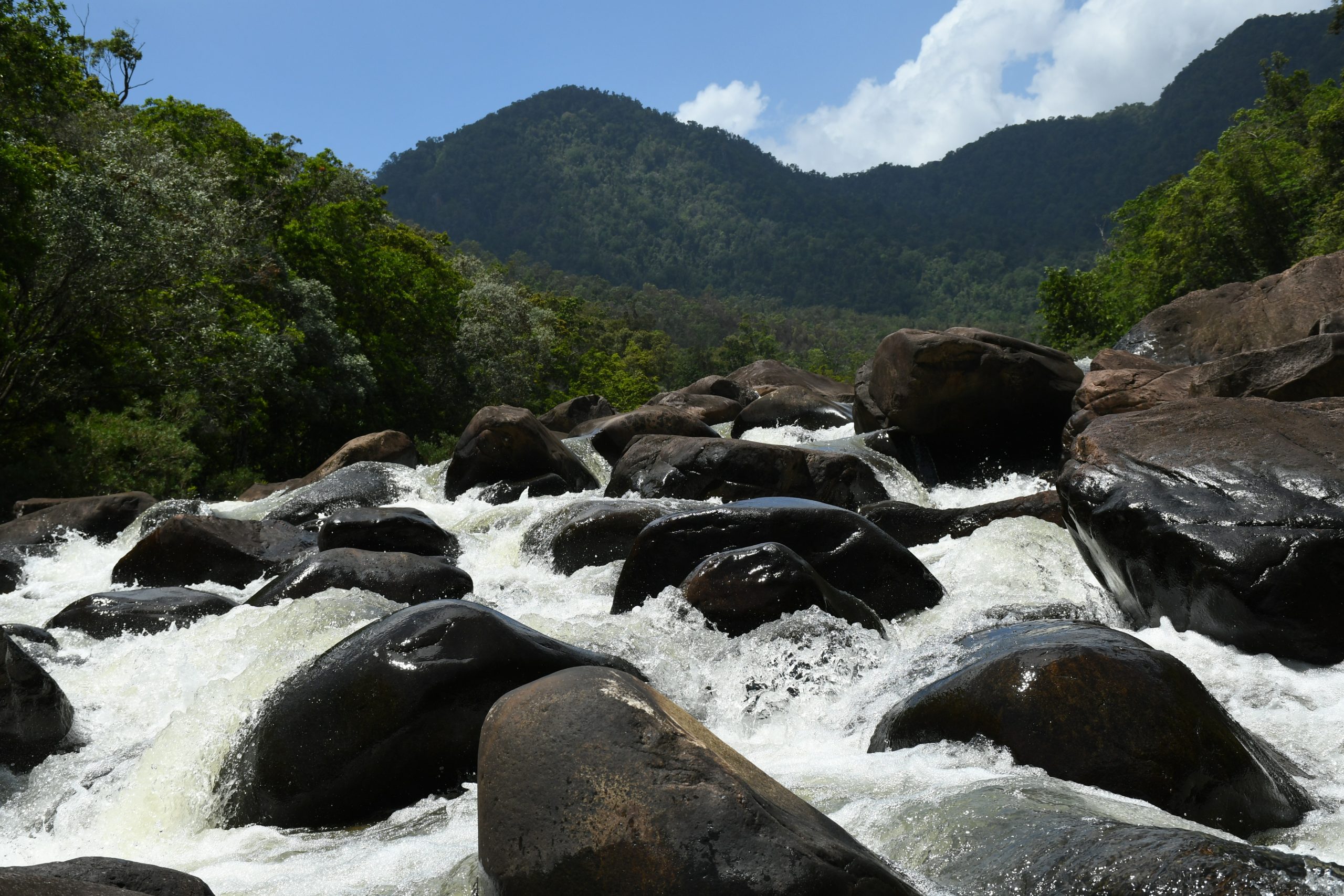 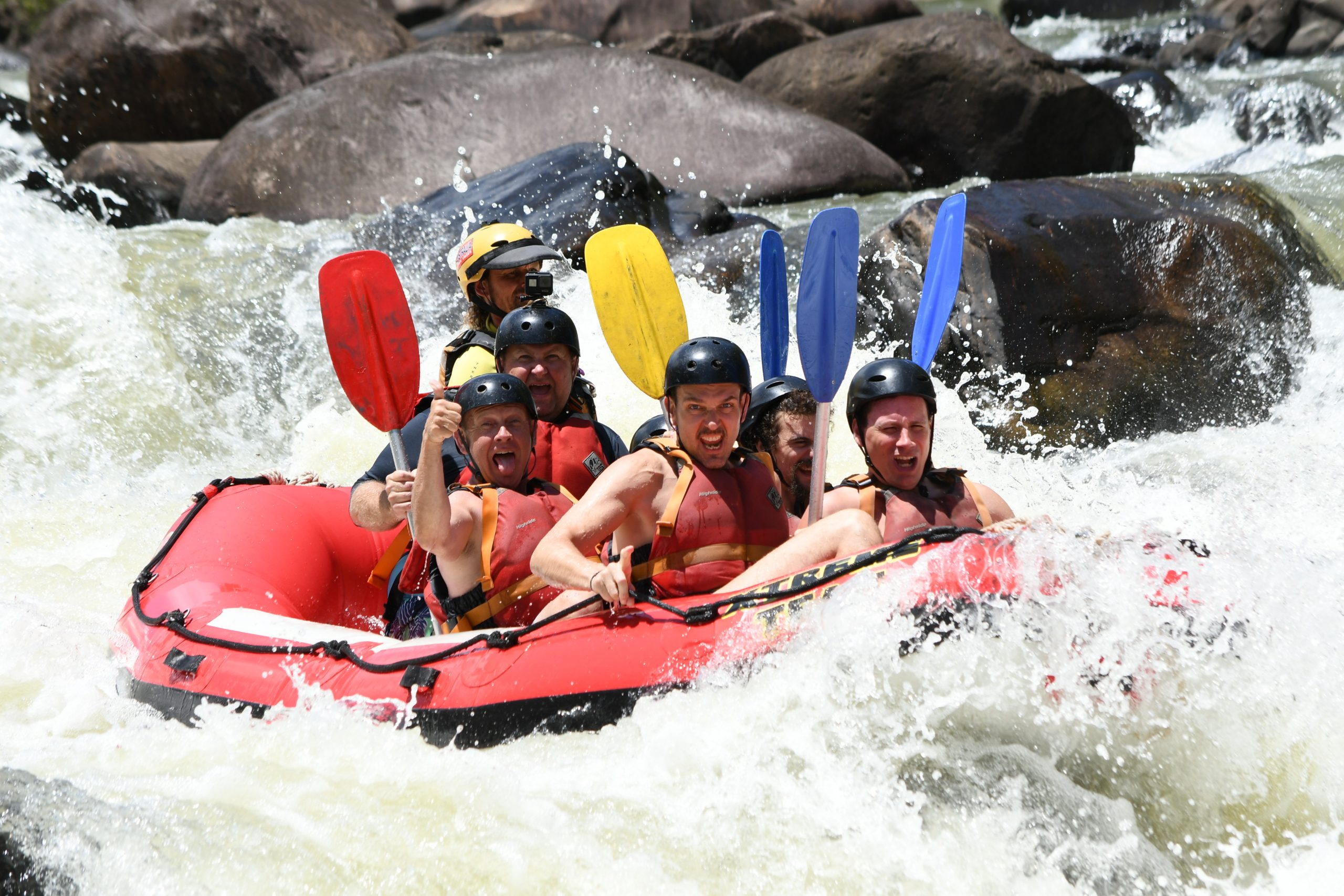 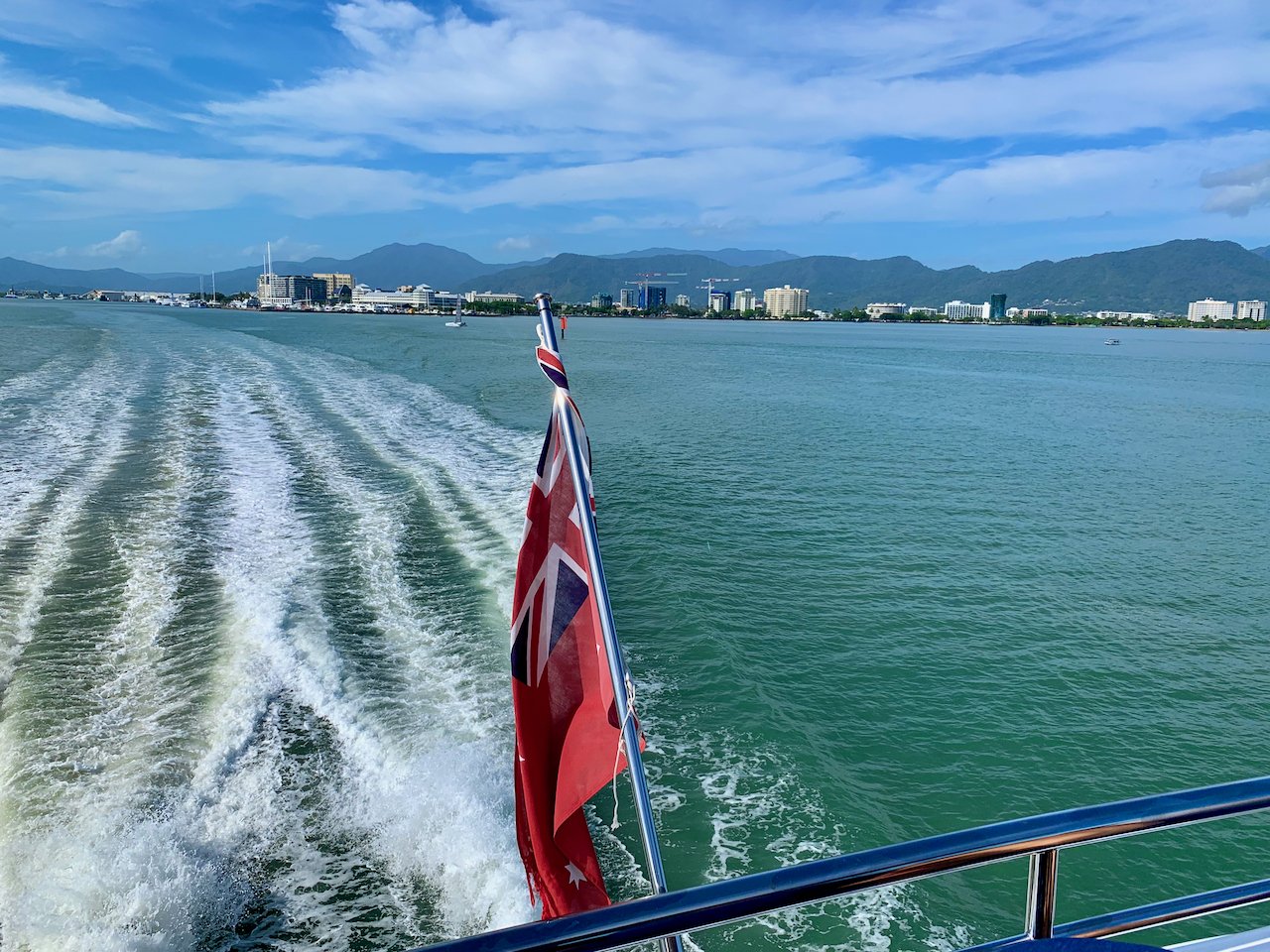 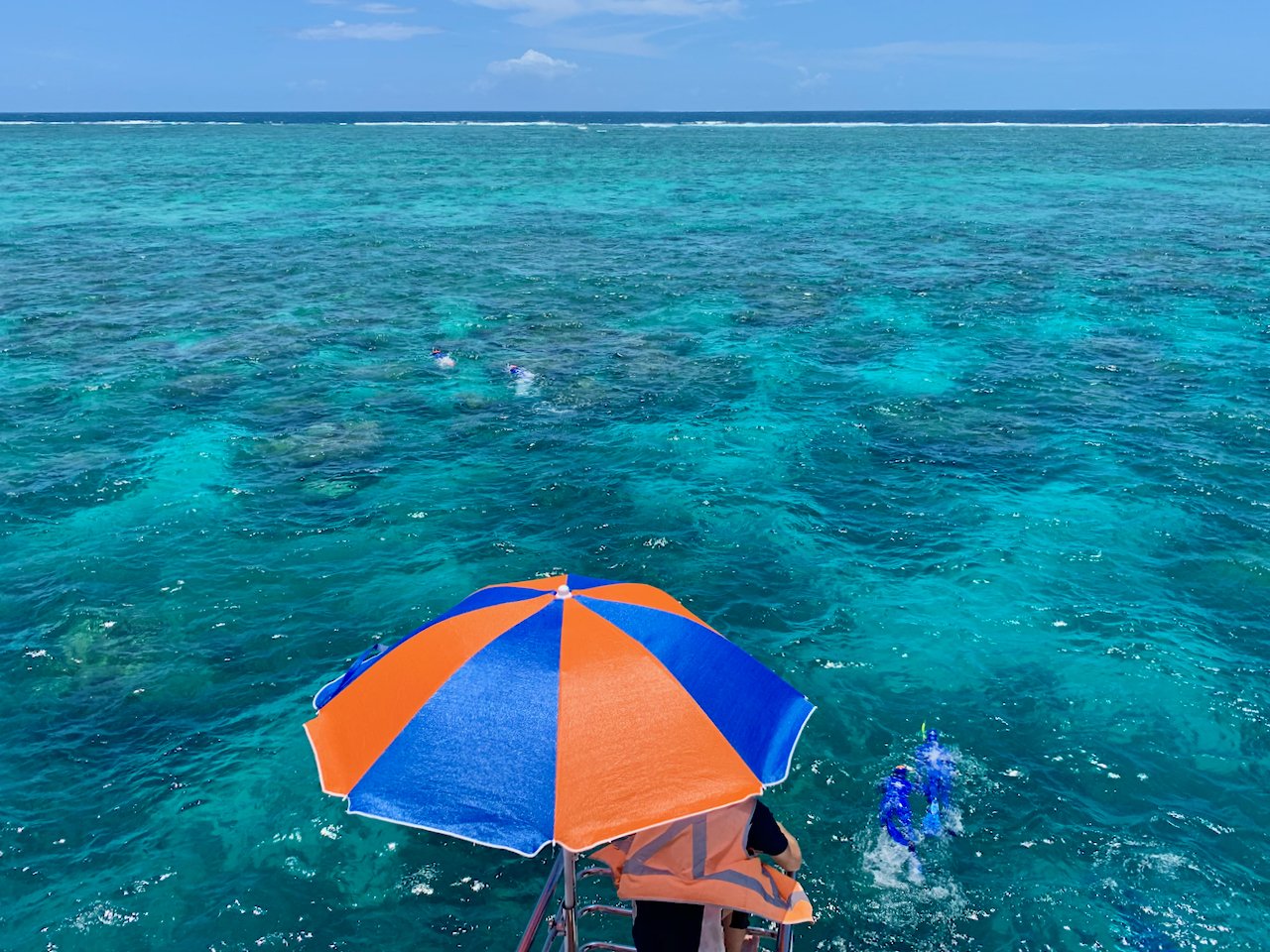 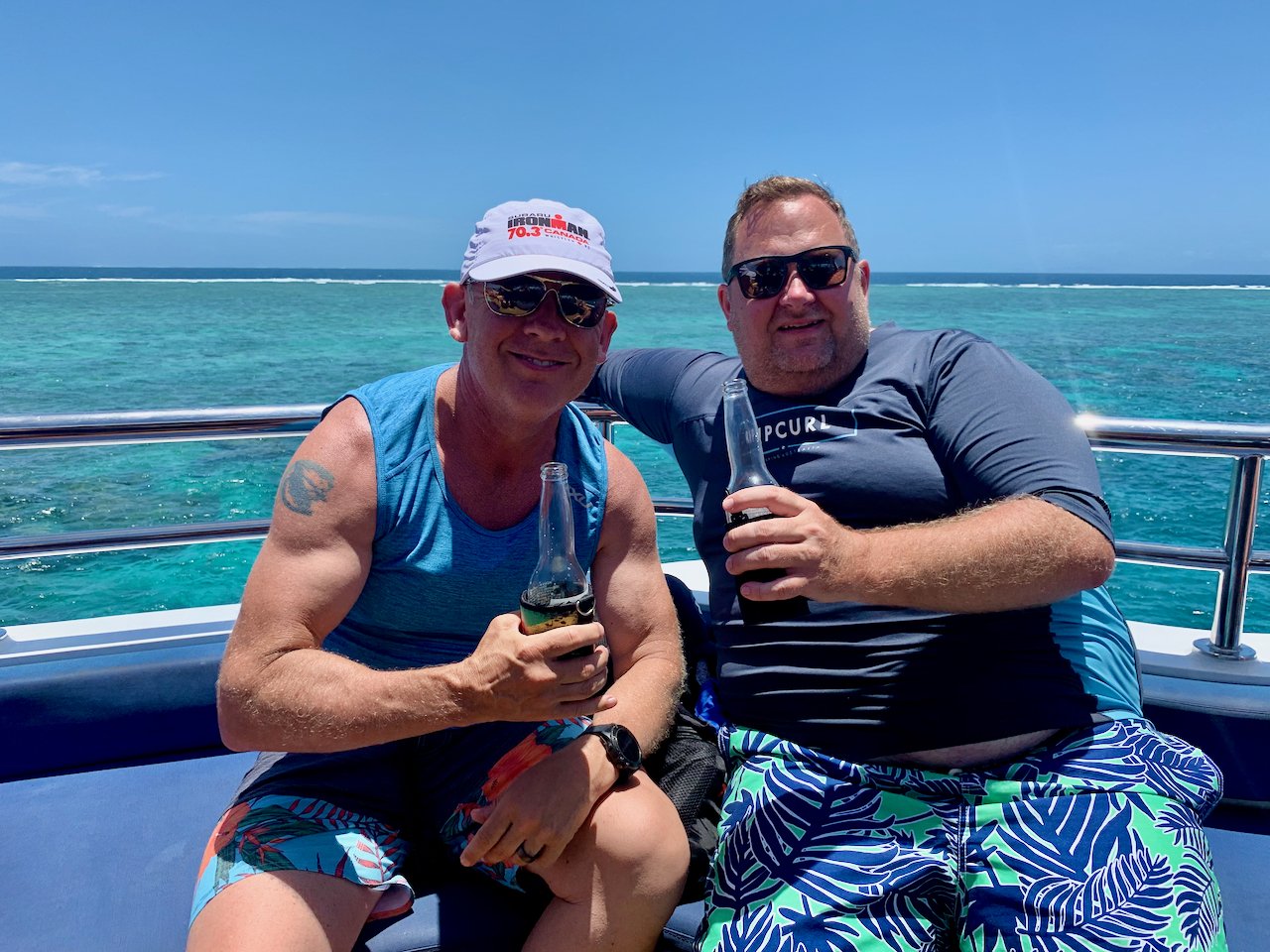 With only three days remaining in Cairns, we decided that booking a three-day Great Barrier Reef, Kuranda Train & Skyrail and Daintree & Cape Tribulation package tour would be the best option to see all of the major natural attractions in our time remaining in Cairns.

We booked this tour through the Cairns Visitor Centre.

The first day of the tour was aboard the MV Evolution, where we were quickly transported from Cairns to the Outer Barrier Reef by luxury catamaran to go snorkelling on the stunning world listed, Norman, Saxon and Hastings Reefs.

We enjoyed an incredible day of snorkelling, laying around in the sun and enjoying way too many drinks on the open decks of the luxury catamaran.

Arriving back in Cairns just after 5:00pm, we headed back to the Airbnb before enjoying a terrific Thai dinner at Iyara By Sakare on the Cairns Esplanade.

The following morning, we headed to the historic Freshwater Railway Station to board the famous Kuranda Scenic Rail for our journey to the top of the mountain village of Kuranda.

The Kuranda Scenic Rail takes approximately 1 ¾ hours as it slowly winds its way through the surrounding tropical rainforest that’s framed by rugged mountains and cascading waterfalls tumbling into the adjacent deep ravines.

There was plenty of free time in Kuranda to explore the village. The Kuranda Markets are open 7 days a week and provided us with the chance to see the local arts and crafts and to do a little souvenir shopping.

There were a number of restaurants and cafes in the village, but we decided to have lunch at the Barron Falls Hotel followed up with a few afternoon beers in the warm Queensland sun at the Kuranda Hotel.

After enjoying our visit to Kuranda Village, it was time to travel back to Cairns via the world famous Skyrail Rainforest Cableway.

The Skyrail Rainforest Cableway experience spans 7.5kms over Australia’s pristine tropical rainforests and passengers glide just metres above the rainforest canopy before descending through the canopy layers and deep into the heart of the forest.

Chris and I disembarked the Skyrail at both of its rainforest mid-stations to explore their tropical rainforest experiences, before reboarding and finally arriving at the Caravonica Skyrail Terminal, where our coach was waiting to transfer us back to our accommodation in Cairns.

That evening we explored the Cains night markets and enjoyed a decent meal at P.J. Obrien’s Irish Pub. 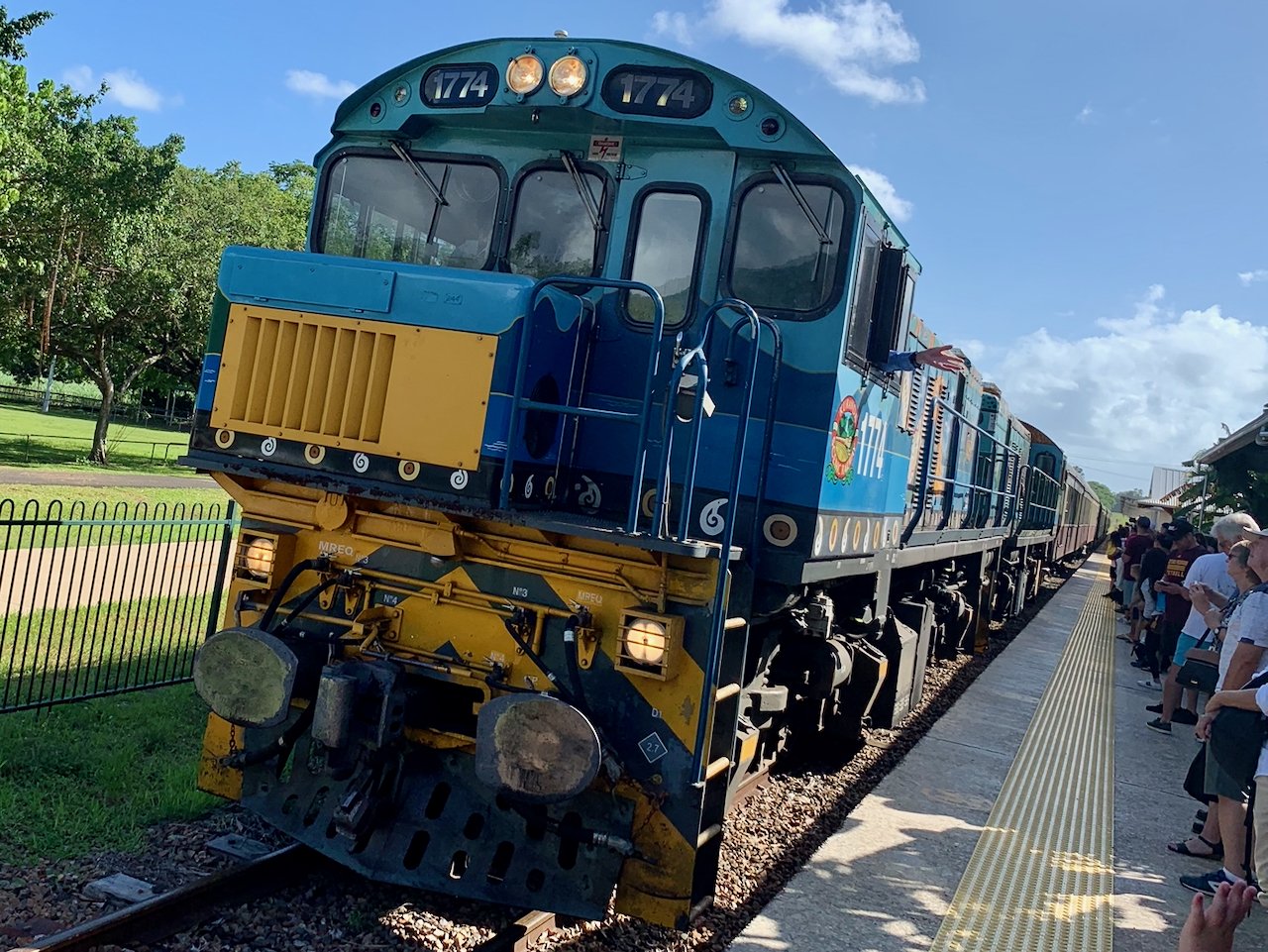 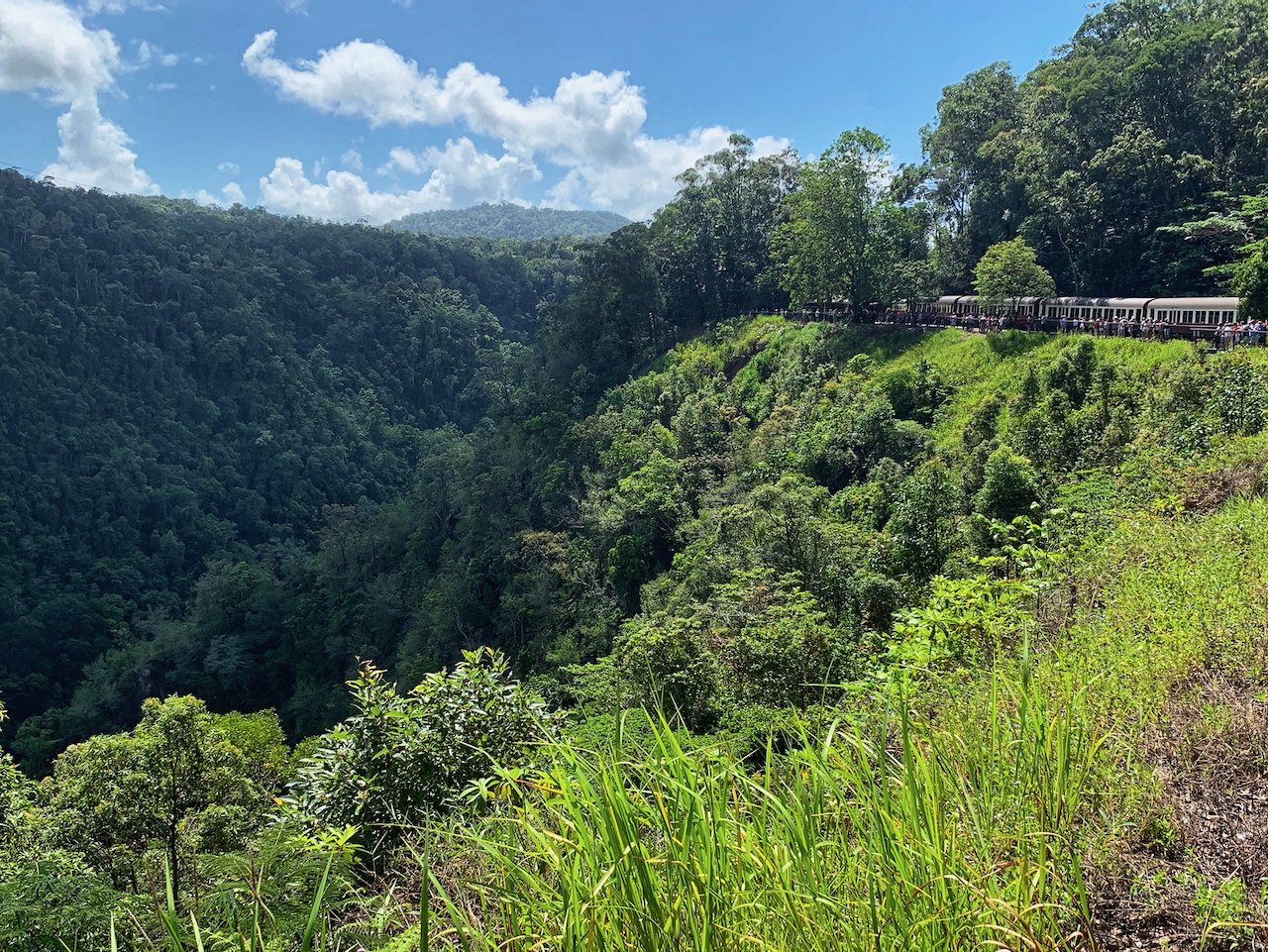 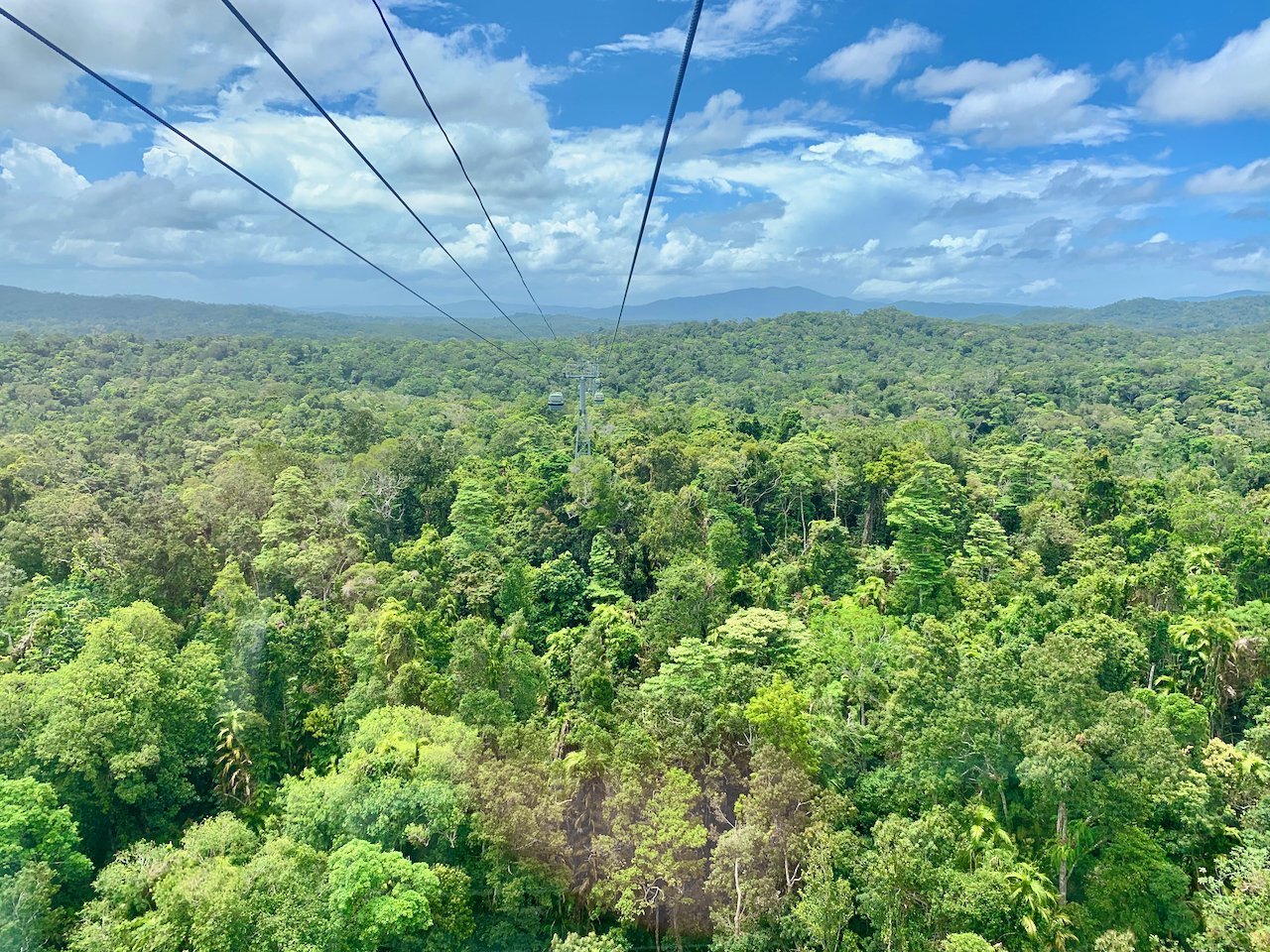 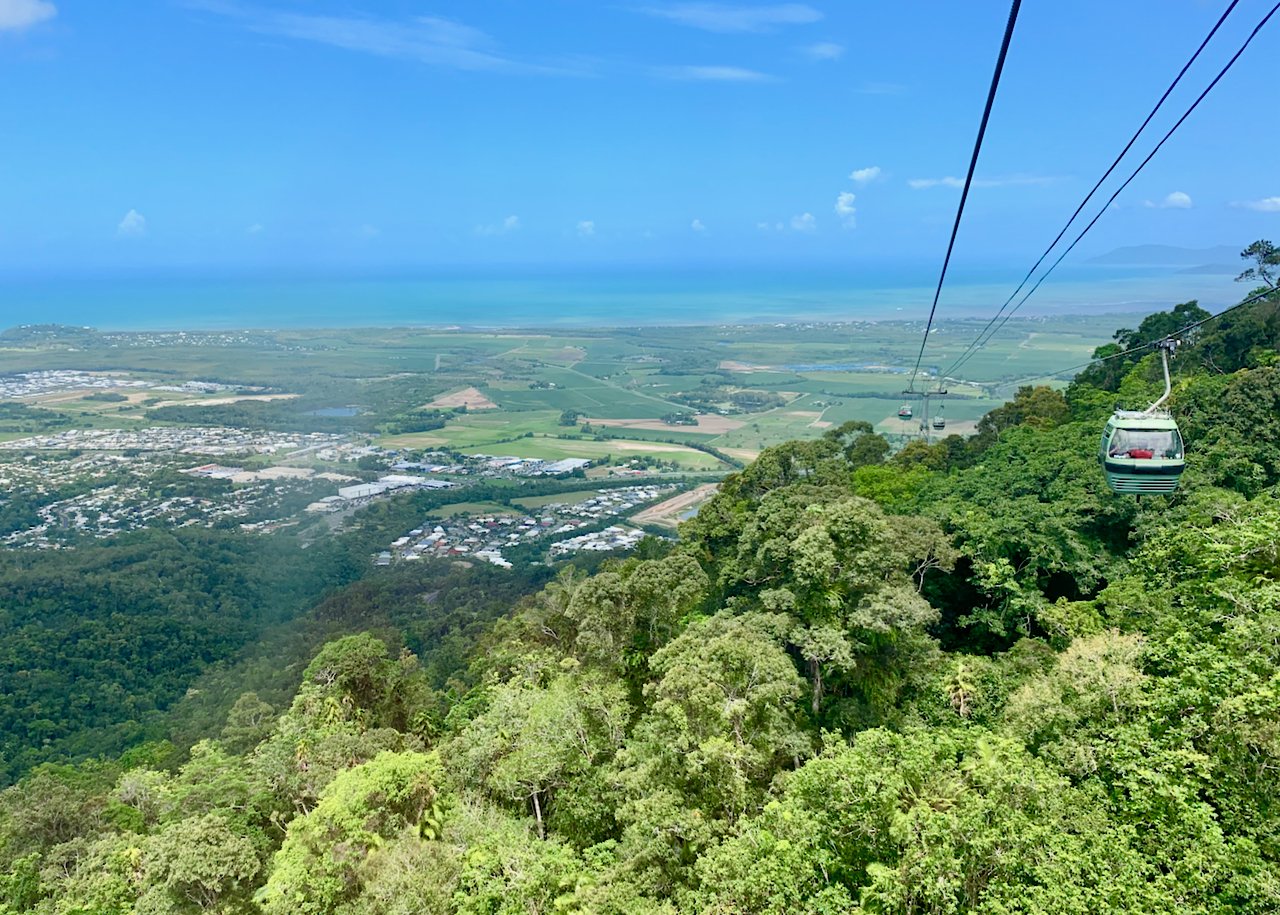 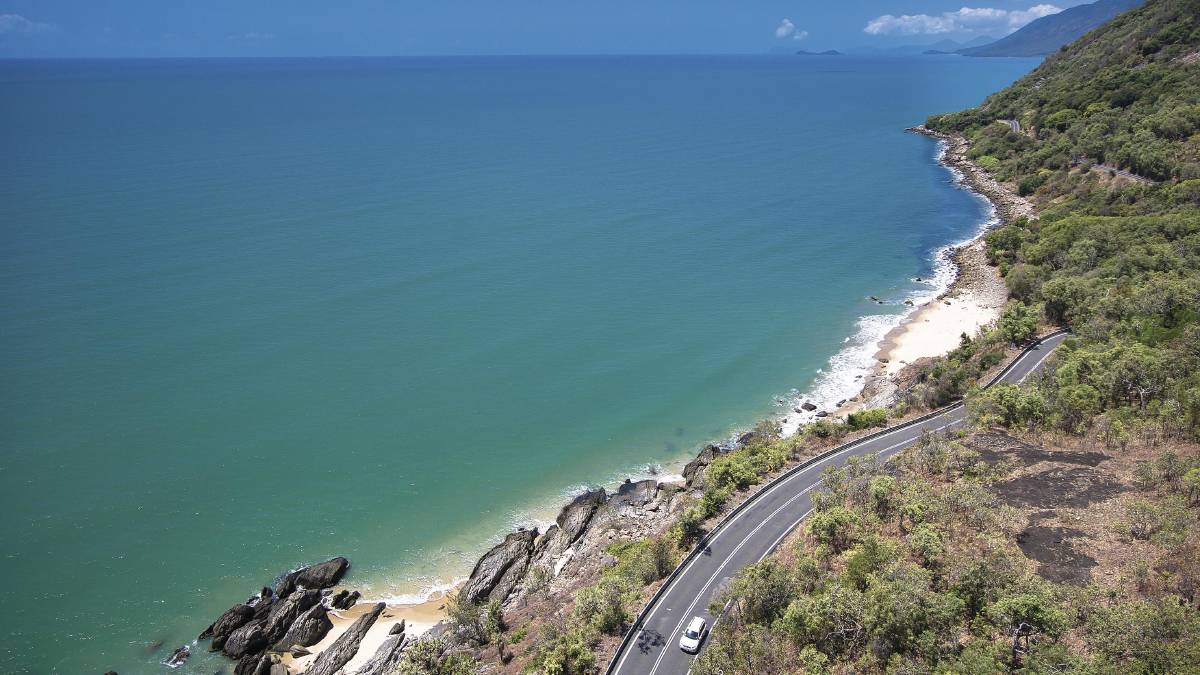 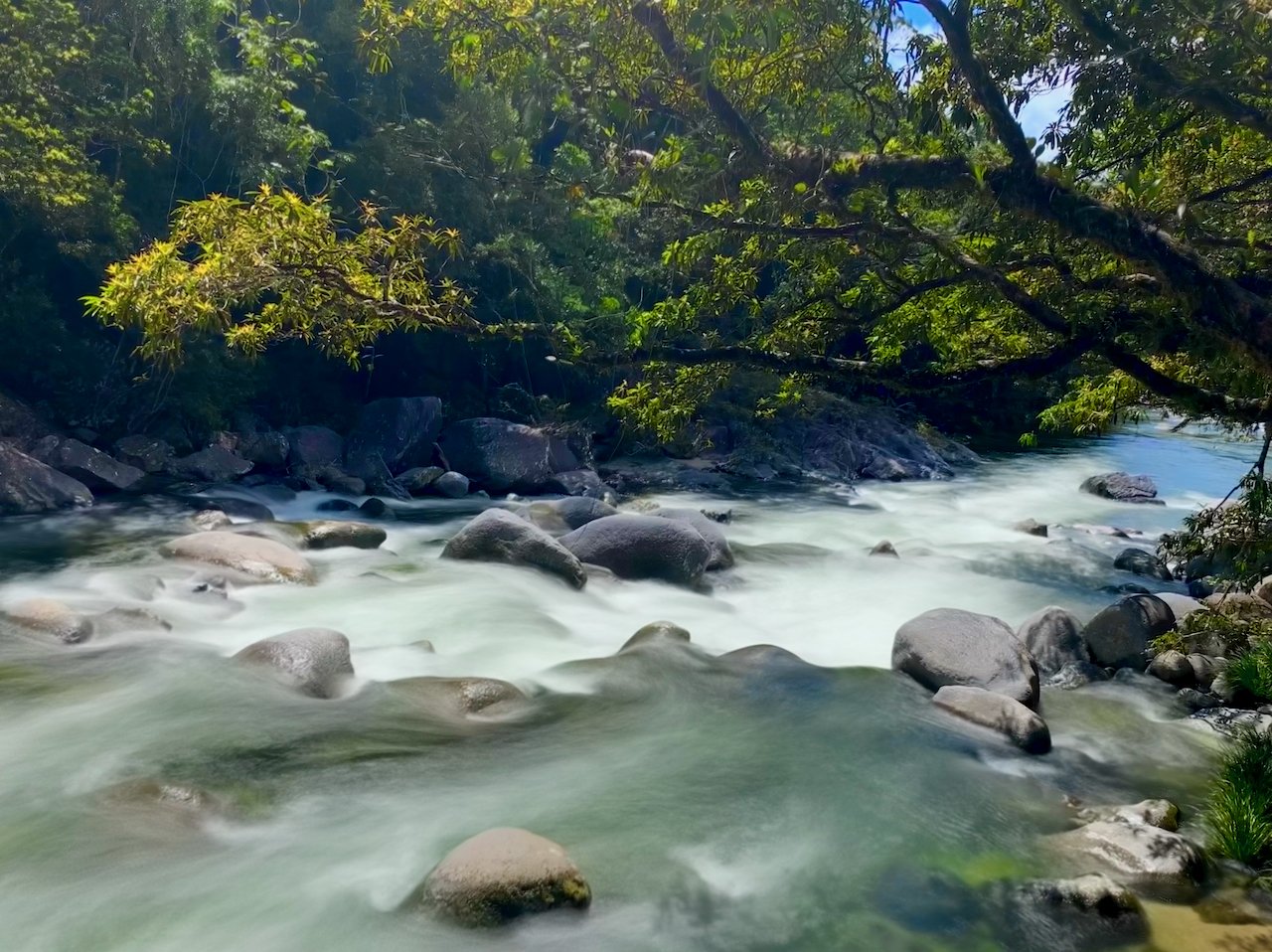 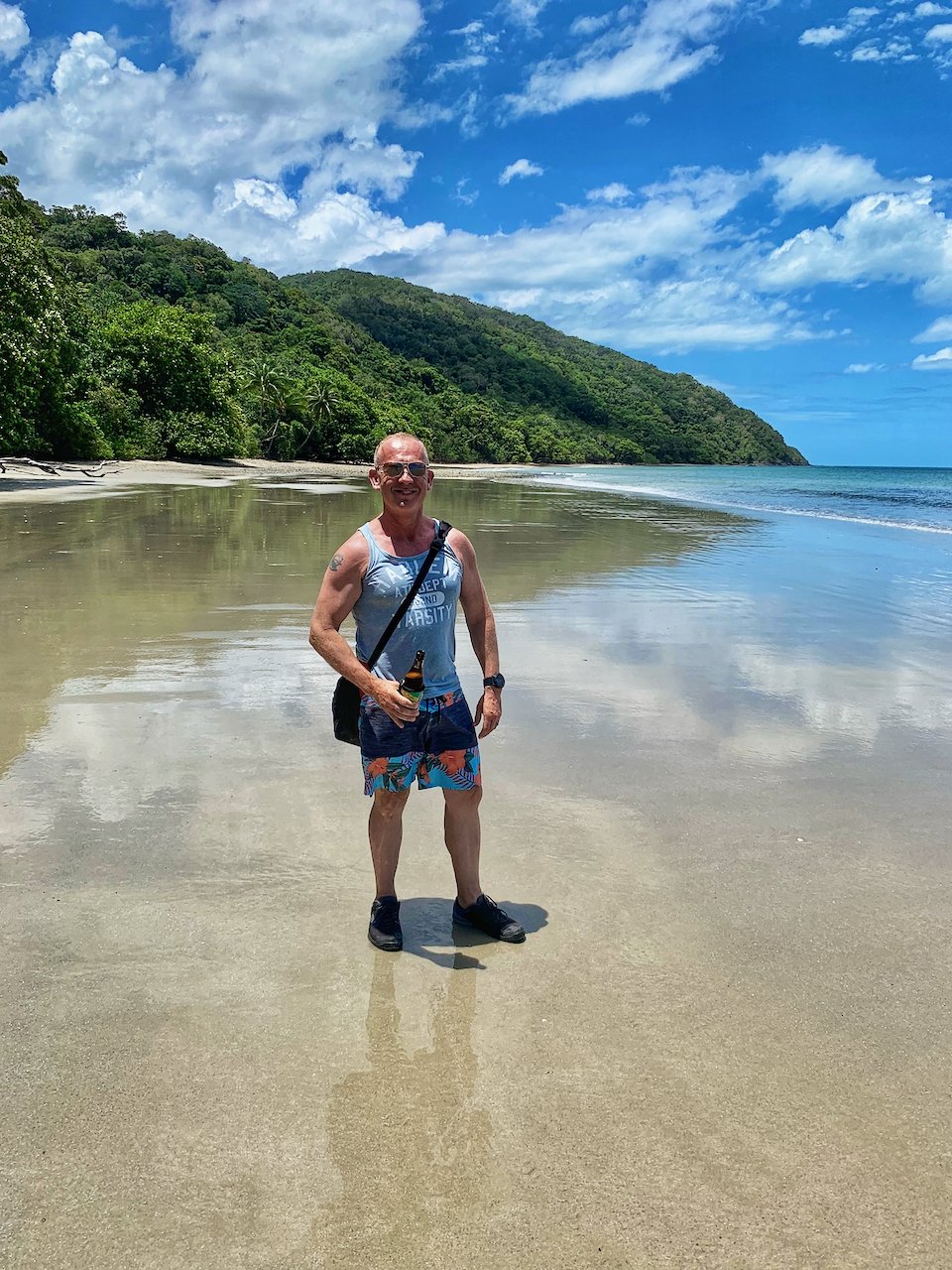 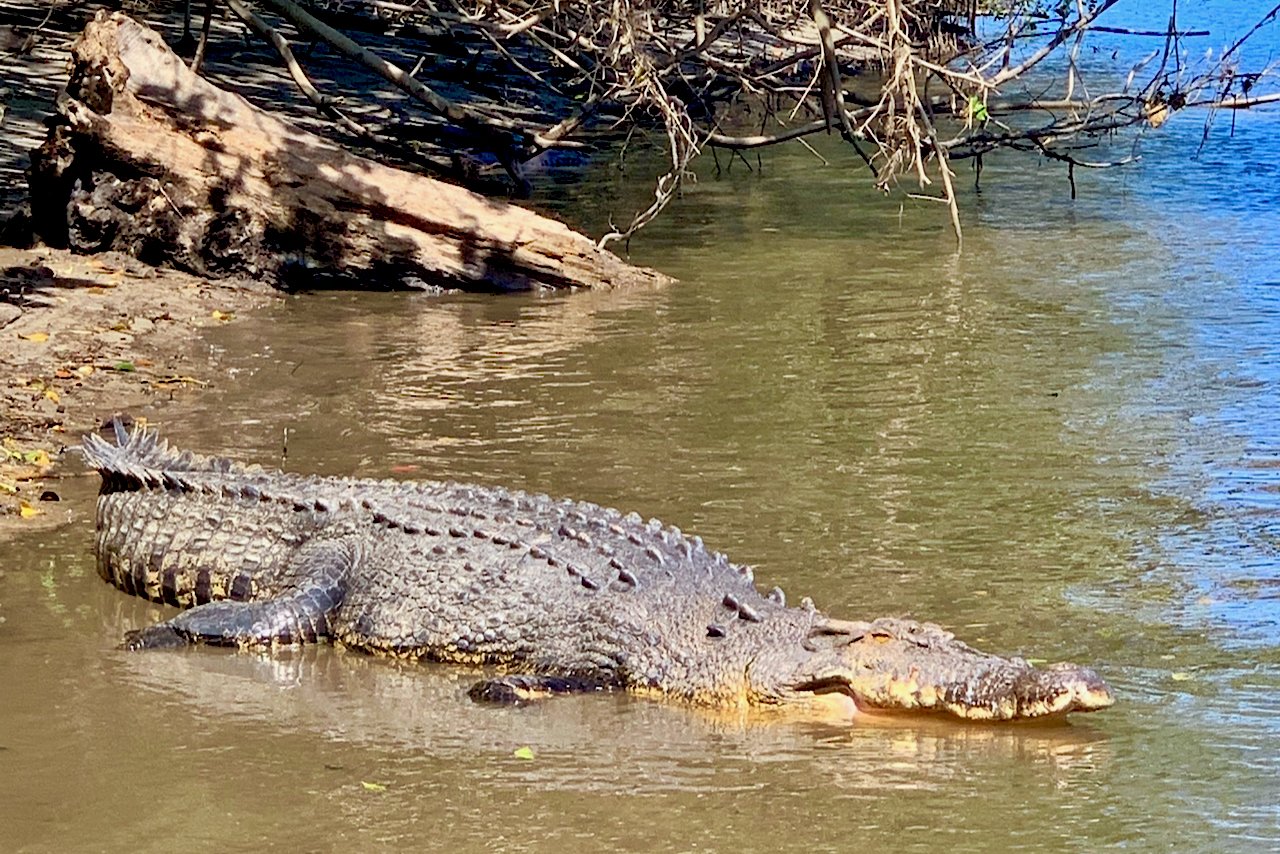 Today was our last full day in Far North Queensland we were looking forward to exploring the World Heritage, Daintree National Park and Cape Tribulation.

After being picked up at our accommodation, we travelled by air-conditioned coach along one of the most renowned scenic coastal roads in Australia, the World Heritage Listed Captain Cook Highway.  This spectacular scenic coastal drive north of Cairns, is a windy coastal drive along miles of uninhabited beaches looking out over the spectacular Coral Sea.

Our first stop for the day was the Rainforest Wildlife Habitat in Port Douglas that is an open and interactive environment for guests and animals to mingle in a spacious and natural setting. We were able to wander along elevated boardwalks, observing up close numerous species of native birds, kangaroos, crocodiles, goannas, koalas and even the world’s most dangerous bird, the Cassowary.

After leaving the Habitat we travelled on to Mossman Gorge National Park and enjoyed a guided rainforest walk through the gorge to see the crystal clear waters of the Mossman River cascade over spectacular boulder formations amongst the lush rainforest.

Once back on the coach, we drove to the Daintree Cable Ferry as this is the only way vehicles can enter into the World Heritage Listed Rainforest and make their way to Cape Tribulation.

On arrival at Cape Tribulation we were treated to a Chef prepared lunch at Cape Trib Beach House, metres from Cape Tribulation Beach that included a set menu choice of local barramundi, steak or a vegetarian option, all served with a fresh garden salad, hot chips and daily baked bread finished off with a tropical fruit platter.

After lunch we were free to kick back and relax under the fringing rainforest of the Daintree at Cape Tribulation Beach where the “Rainforest really does meet the Reef”!

Later in the afternoon we took a Daintree River Wildlife Cruise that provided a rare opportunity to see crocodiles in their native habitat.

Following the cruise, it was time to leave the Daintree area, and we arrived back in Cairns late in the afternnon, just before 7:00pm.

After a such big day, we were exhausted so we decided to buy a couple of bottles of wine and order take away pizzas from Rattle N Hum to enjoy a very leisurely night on our Airbnb balcony watching the throngs of people enjoying all the action on the Cairns Esplanade.

Friday was our departure day, so we slept in a little, grabbed a late breakfast and spent the remainder of our time around the Airbnb’s pool, prior to catching our flight back to Sydney mid afternoon.

Chris and I both had a great time in Cairns and four full days allowed us to get a  good taste of what Cairns (and Far North Queensland) has on offer. However there was still so much to see and we had very limited down time.

If you are planning a trip to Cairns our recommendation would be to stay for at least – 5 full days (6 Nights) as this would ensure plenty of time to see all of the main attractions and sites with time to also relax in this tropical paradise.

When we next return to Cairns, we will ammend this article to guide travellers through a 5 Day Cairns adventure getaway. 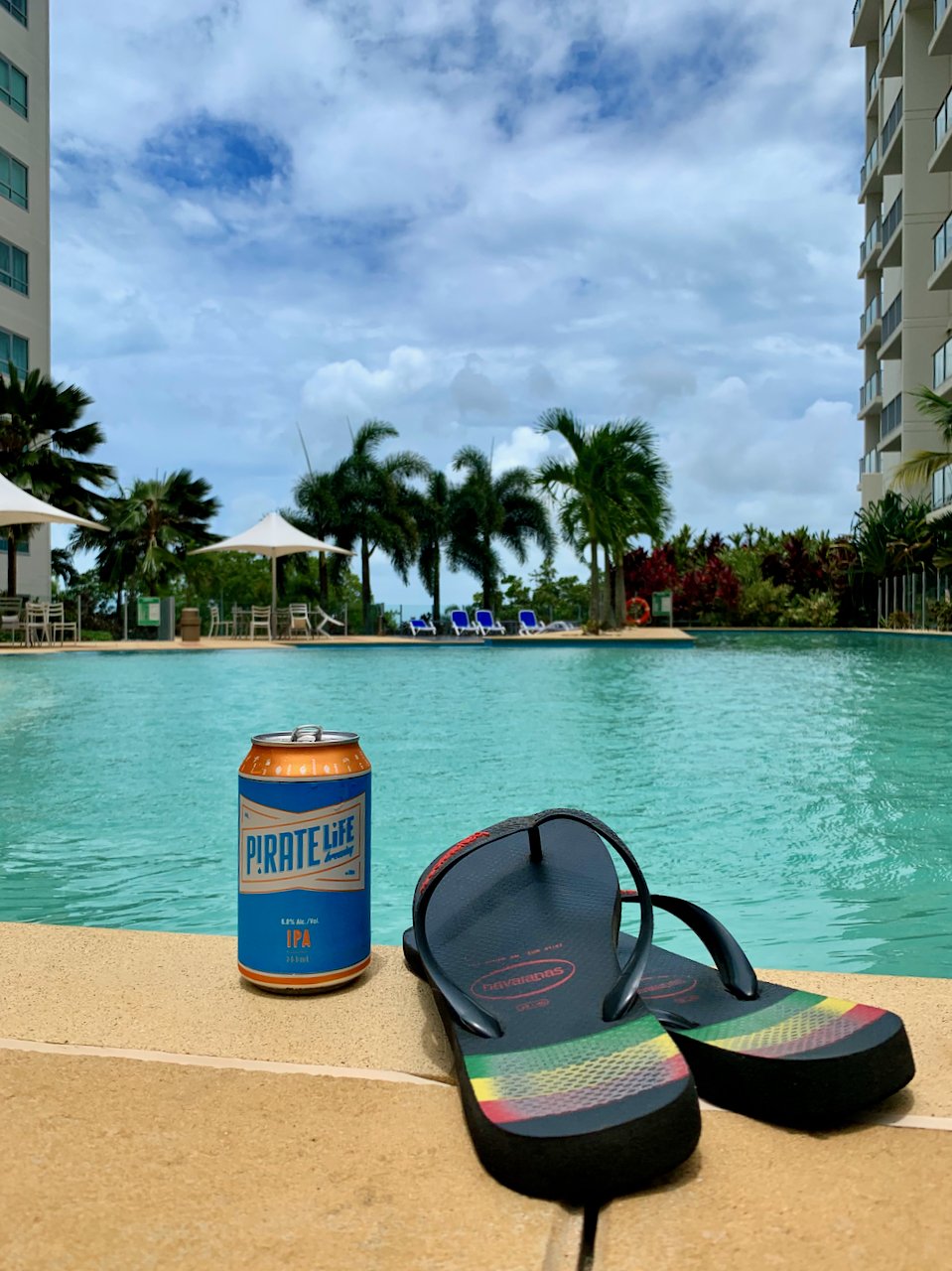 Please message us on Facebook, Instagram or through our site, if you have any questions regarding our Cairns adventure guide or travelling in Australia more generally.

Don’t forget to bookmark our site to keep up to date on all of our future adventures, check out our Aeonian Nomads Youtube Channel to watch our travel videos and if you enjoyed our 4 day Cairns adventure guide article please share this post with your family and friends, as it will continue to help other travellers to find our travel information. 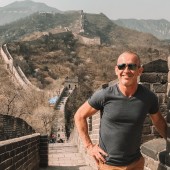 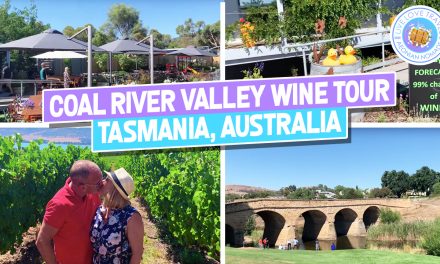 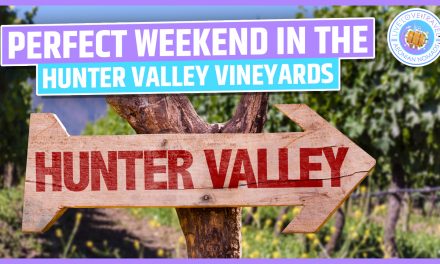 Our Guide to the Best Cellar Doors, Vineyards and Dining in the Hunter Valley Wine Region Part 1 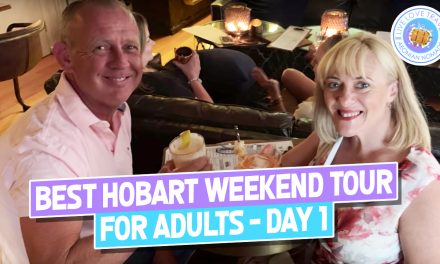 Adult Guide to the Perfect Weekend in Hobart – Day 1

Checked in this evening to the JW Marriott Tucson

Must be Super Bowl time in Phoenix. Love any city

The 220 mile up journey to afternoon snacks and dr

Last of the Festival of the Arts Food Studio’s f

Had to try the most controversial food item at thi

The Artists Table Food Studio in the American Pavi

I was first introduced to plant based meats at the

The Painted Panda Food Studio in China. I tried th

7th ride on the Guardians of the Galaxy: Cosmic Re

Breakfast of champions today thanks to @gideonsbak

The closing scene of tonight’s performance of Fa

The opening scene of tonight’s performance of Fa

The BoardWalk Deli is a Northeastern-style deli at

You have successfully subscribed to Aeonian Nomads . Welcome aboard!